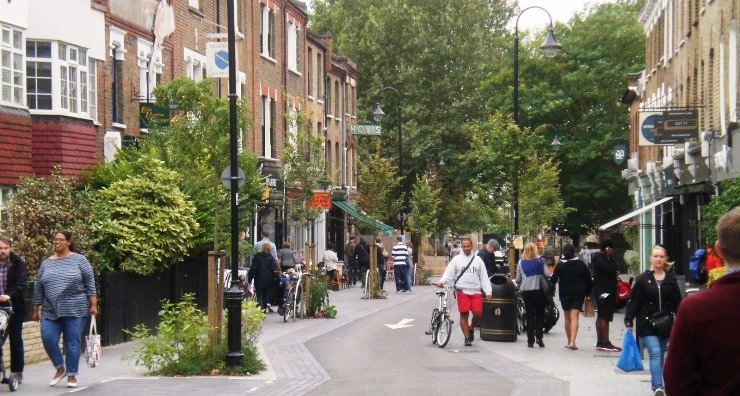 This event, organised jointly by Bristol Civic Society and the University of the West of England (UWE), attracted a large audience as part of Festival of Future City.

The event was introduced by Miriam Ricci of UWE. She explained that the event would seek to address the questions: What is a liveable neighbourhood? What does it look like? What are the things that make a neighbourhood, and a city, liveable? What does the evidence tell us? What is Bristol doing to make neighbourhoods more liveable?

Alan Morris of Bristol Civic Society explained that the event had been his idea. He would like to see similar schemes implemented in Bristol, and he invited members of the audience to get in touch with him through the Civic Society website.

He then introduced a video of the low-traffic neighbourhood approach in Waltham Forest in London, which is a good introduction to the key elements of a Liveable Neighbourhood scheme.

Steve Melia cited a study showing that neighbourhood social connections reduce as the traffic of a street increase. Traffic removal is necessary for a Liveable Neighbourhood – but not sufficient. It is achieved by pedestrianisation, filtered permeability, or reductions in road capacity. Examples can be seen here.

There is always opposition to traffic removal. Never assume you will get agreement in advance, only after the scheme is introduced. This takes leadership and faith. Taking fright of consultation results and watering down the scheme is not the answer. Make the scheme so fantastic that people say “I wish it had always been like that.”

Danni Sinnett said that more greening is essential. Not just parks, but lots of spaces, large and small. Evidence from schemes shows multiple benefits – not just primary aims like less flooding and greater biodiversity, but social improvements evidenced by a reduction in turnover of tenancies and a rise in voting levels.

Nicola Beech, Council Cabinet member, reminded the audience of the Bristol context of inequality, the housing crisis and population growth. This requires greater density in new developments, for which the council has published Urban Living policy guidance to ensure it is done well. She cited various current development schemes and designated areas of growth. For instance in Bedminster Green, as an example of making more of a natural asset, the river Malago will be uncovered.

There was time for the panel to answer a few questions from the audience. In response to a question about animation, the panel agreed it is about more than physical changes: activities and events both before and after changes are done are essential. The question of affordability was mentioned, and in response it was said that good design does not have to be expensive.

The event slides are available with these links: City Council slides and UWE slides.

The Festival of the Future City organisers have made a sound recording of the event available here.