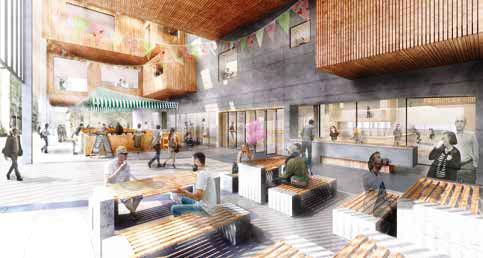 Each year Bristol Civic Society presents an award for an outstanding piece of work by a graduating student from the Faculty of Environment and Technology at the University of the West of England. Here is the 2018 winning project by Lewis Hill.

The Independents for Frome Town Hall – A Forum for Collaboration, Debate and Trade
by Lewis Hill

In September 2017 myself and 40 Architecture and Planning students were tasked to undertake a study of Frome (available at www.FutureFrome.com). Frome is a town in eastern Somerset and the site of the final year Design Studio project.

Below the surface Frome is a town that is intrinsically linked to the economic development of Somerset. The Industrial Revolution in the Midlands and Northern England spelt the end for many thriving industries in Frome and across Somerset. Subsequently with huge economic crashes in Frome throughout the 1800s, social democracy and faith in the community offered local people hope of a positive future. Many of the independent retailers and markets that were established in the late 1800s and early 1900s can still be seen in Frome today. In the last half-century inappropriate planning and development has started to dilute this independent identity. The town’s historic footprint has been fractured and economic decline is visible through widespread dereliction. To inspire change, in the 2015 Parish elections the people of Frome elected all 17 seats to the Independents for Frome (IfF) Party who work without the ‘whip’ of formal leadership. As students, we were challenged to produce a masterplan for Frome’s town centre, along with a landmark building that would be delivered as part of the Frome Neighbourhood Plan by 2028.

The masterplan is informed by the ‘Frome Independent’ market, to enable the vitality of these monthly marketdays to be commonplace in the town and allow an independent community to thrive. By sensitively utilising the existing architecture and using the derelict zones to provide an array of new town centre developments, the dynamic of the town centre is transformed. Pedestrian urban spines linked by a series of public spaces provide new lateral connections to ensure that the town centre is a hive of social activity.

The Independents for Frome Town Hall is situated both functionally and symbolically at the centre of the development. By raising administrative social activities is made available, as well as opening links between the surrounding public spaces and the town hall chamber. This encourages active community engagement in local politics and town hall events. Tiered seating and viewing galleries above ground level facilitate an immersive and intense atmosphere, with debate occurring at all levels. A gently inclining ramp unifies the surrounding public spaces with each building level; removing the social and political hierarchy that so often both symbolically and physically divides political buildings.

‘Independence’ and ‘democracy’ rely on a wide structure of cultural, social and political relationships beyond simply the design of our Town Halls. The manifestation of ‘bottom-up’ ideas is encouraged by enabling local people to freely interact with members of all involved organisations in the governmental hierarchy. This historic independent spirit of the population of Frome will not only encourage the development of Frome alone, it also has the potential to transform the structure of local decision-making throughout the UK in the future.