The Society’s Design Awards have been a popular part of the programme for over 25 years. The deadline for nominations is the end of February (and there are already 14 for 2023).

The Judging Panel, currently with 7 members from a range of backgrounds, assesses them all with final decisions in April and the presentation held in June. The distinctive blue plaques are manufactured by local company Wards, located in Barton Hill. The Society is grateful to Savills, property advisers, for sponsoring the Awards. 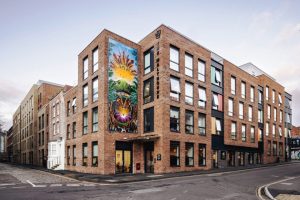 Client: Watkin Jones
Architect: AWW
Panel Member Andy Reynolds reports that The Malthouse contains accommodation and amenity space for 348 students, employment space and a private house in a Grade II listed townhouse.
Situated at the boundary between St Paul’s and Stokes Croft the area is undergoing rapid regeneration and change. This development has replaced a post-war office block, light-industrial units and surface car-parking with a 4 storey, u-shaped block of student accommodation.

The panel particularly liked the way that the building respects the historic grain of the city-scape, integrates and restores the historic 25 Wilder Street, and offers varied facade treatments and bright, vibrant murals to passers-by and the local community. Hopefully it will be a model for future student accommodation developments in the area. 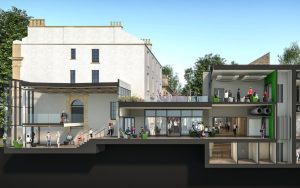 Client: University of Bristol
Architect: ADP Architecture
Craig O’Brien’s citation notes that the panel were impressed by the design of the new Humanities building, particularly as it meets Tyndall’s Park Road. It was considered that the building is of an appropriate scale that blends well with the existing listed buildings, including direct physical connections, while offering a contrasting high quality, modern vernacular. The materials used including brick, timber louvres and glass as well as stainless steel railings created a particularly successful composition complimented by a landscaping scheme that also formed a new entrance to the buildings from Woodland Road. 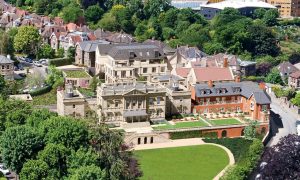 Client: Juniper Homes
Architects: AWW with Nash Partnership, and KWL
In its previous incarnation as a girl’s school, Redland Court had suffered utilitarian additions that hid its elegant origins. Clearly, its value as a residential development is tied into the restoration of the site’s good looks. Chris Leeks points out that the central building in particular has been carefully restored and looks magnificent especially when viewed across the freshly landscaped grounds.

Thankfully new buildings aren’t just a pastiche of Redland Court itself. A variety of materials have been used from red brick to a bath and grey stone mix. These marry in well with neighbouring properties. The limited car parking is discreetly accommodated. 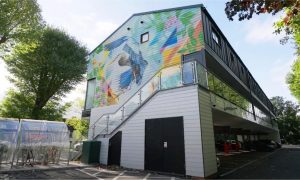 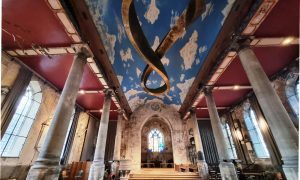 Owner and project manager: Norman Routledge
Architect: Quentin Alder
The church of St Michael’s on the Mount Without is a Grade II* listed building. The church became redundant in 1998 and for many years lay idle and was boarded up. In 2016 when vandals set the building alight leading to the collapse of the roof over the nave and northern aisle and the exposure of the interior to the elements.

Mike Craggs noted that the future of the building looked bleak until it was acquired by Norman Routledge in 2019 and since that time considerable resources have been devoted to reroofing the building and restoring elements of the interior culminating in the impressive space where the Awards Presentation took place.

Unlike this evening’s other awards, this accolade doesn’t principally concern the quality of design or the visual impact of the scheme. It’s a recognition of the importance of retaining a key building in the local townscape and of securing uses in that building which are beneficial both to the local community and to the wider city.