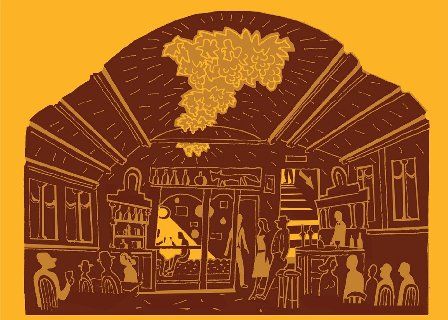 A partnership project initiated through the Old City Traders’ & Business Forum has produced a set of 15 beautifully designed postcards that highlight special buildings and businesses in Bristol’s Old City. They will be available on ‘Make Sunday Special’ on 3 August.

The postcards accompany the Walled City Walking Map that was launched in April.

The Walled City Walk, that brings to life the old Norman city of Bristol, is a partnership project between The Civic Society, St Stephens Church and Centrespace along with some expertise and help from Destination Bristol, UWE and the City Council. It has proved not just popular with folk following the walk, but also with the independent businesses and traders in the Old City. So much so in fact that the project has now been extended by producing postcards linking the walk to the traders themselves.

They aren’t just any old postcards either. The illustrations on the postcards are carried out by Centrespace’s Simon Tozer and printed on a beautiful old Heidelberg letterpress printing press by Nick Hand, also in Centrespace, where The Letterpress Collective houses both presses and type for their public workshops. Nick and Simon run both letterpress and screen-printing workshops at Centrespace.

The cards are a wonderful set of fifteen individual cards and highlight both the history as well as current commercial use of a building. The sets are available as a set (only 100 available) from Simon’s stall on the upcoming Make Sunday Special on Corn Street on July 6th. The full set will cost £20, but individual cards can be collected from the businesses themselves. They are sure to become a collectors’ item.

After the launch the postcards will be available at the Tourist Information Centre and certain businesses in the Old City – which are listed on the website under http://bristololdcity.co.uk/old-city-heritage-trail