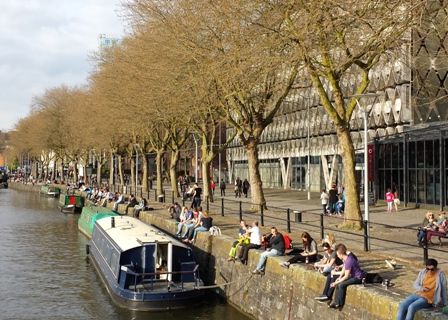 In 1972 all our great elms began to die. Bristol Civic Society had been looking at ways in which it might contribute more to improving Bristol’s environment. Following the national campaign to “Plant a tree in ‘73”, it decided to promote a tree planting scheme focussed on street trees, since few had been planted in the middle of the city since before World War II.

At that time, I was an urban designer with Bristol City Council (BCC) Planning Department and New Zealander Frank Kelf was a planner working with me in the department. On behalf of the Society we were able to sell a tree package to BCC.

The trees would be planted in the city centre and main radial routes for maximum impact; they would be as large as possible to avoid easy vandalism, making them quite expensive. If the public could be persuaded to buy them, BCC would agree to obtain, plant and maintain the trees. This was useful to the council because the acceptance of funds from the public helped to protect them from the cuts they regularly suffered as a “non essential” service.

Suitable sites for planting alongside the public highway are never easy to find, needing to avoid underground services, traffic lights, access to nearby buildings and a range of other potential objections.

This is where Frank came in. He set about persuading the planning department and his sceptical colleagues in Highways to accept street trees. He was astonishingly successful, so much so that I have always wondered how he did it. But he was a charming and persuasive colleague with a soft Antipodean accent, so maybe that was the answer. He was certainly the man to have on our side!

At the same time, the Society launched its campaign called “Trees for Bristol’s Streets” to obtain the money to buy the trees. Volunteers from the Society collected from the public, while flower bulbs were provided by BCC and sold to the public who were encouraged to plant them on suitable verges. It was a great success.

Where businesses were near planting sites, we approached them to sponsor individual trees with some spectacular results. As a result of a BCC idea publicised through a “20 Ideas for Bristol” exhibition, it was decided to ask businesses on Narrow Quay if they would sponsor a new avenue of plane trees along its entire length. The trees were planted and the quay was transformed from a derelict industrial site into a popular waterside walk – as in the photo along Narrow Quay.

Today our street trees are again under attack from diseases, causing some of them to be removed, while few are being planted. So I sincerely hope that those behind the initiatives now being taken to replace and extend street tree planting will keep up the pressure and be successful.