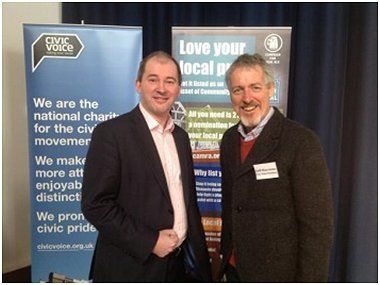 Recent localism legislation recognises community assets of social value, whether or not they are buildings of architectural merit. It allows communities to nominate such buildings and other assets to go on a ‘local list’ of valued assets, so that this can be recognised if development is considered at a later date. Another part of the legislation allows communities time to bid for such a building if it comes up for sale.

These are legislative tools for communities to employ. Griff pointed out that taking over a community asset requires much more than this – a well-managed community action group, with a sound business plan, and which has the trust of the community, politicians and business owners. Some of the other government legislation relaxes constraints on development, and he expressed concern that the localism provisions were something of a PR stunt.

But the tools are there to be used, and other speakers explained how to use them. One third of the assets nominated so far are pubs, and a speaker from CAMRA described the organisation’s active involvement in this.

The event was held at Trinity Arts Centre in Old Market, itself a community asset. Simon Birch, vice-chair of Bristol Civic Society welcomed attendees from across the south-west.

For more information, see two short videos – one here by Stephen Williams for the BBC, and one here by Civic Voice.