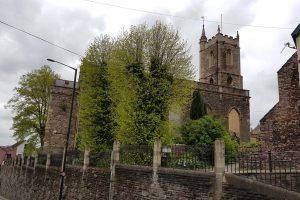 The Civic Society has been campaigning for a number of years to bring about the restoration of St Michael’s, a neglected Georgian church (Listed grade 2*). For four years, we campaigned to persuade the Diocese to resolve the longstanding challenge of finding a new use for St Michael’s church, boarded up for nearly twenty years.

At the end of 2017 we put in a bid to purchase the church and our report in the Spring 2018 edition of Better Bristol (reproduced here) ended by saying:

We are promised a decision in late March / early April so the new owners will probably be known by the time Better Bristol is published. Our fingers are crossed!

The decision was made on time – we were ultimately unsuccessful and the selected purchaser was Ian Johnson, a Clifton resident with the excellent track record of sensitively restoring the Observatory on Clifton Down. His plans involve restoring the church as an events venue with a local history museum in the crypt. Details are sketchy so far but in a an email in July 2018 Ian reported that he was:

Nearly there! Then we can go into details – church taking ages with things!

We look forward to hearing more shortly and to supporting the restoration of this wonderful building and to seeing it brought into its new life.

Other St Michaels on the Mount posts