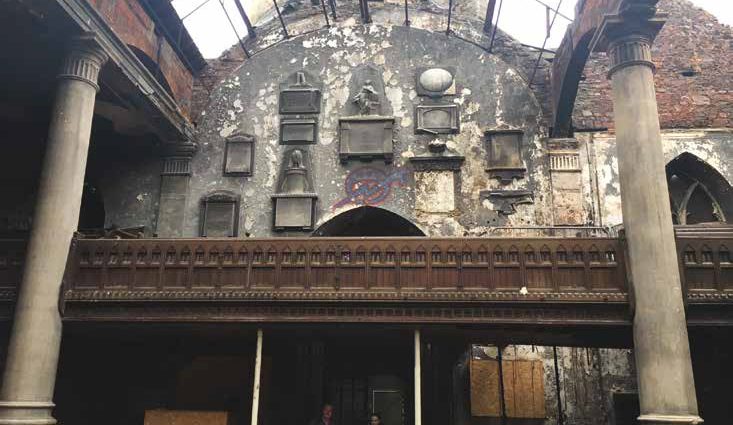 The following is a copy of the report in the Spring 2018 edition of Better Bristol.

St Michael’s was closed in 1998 due to a diminishing congregation. No immediate decision was taken to dispose of the building and a series of alternative uses were examined, of varying degrees of credibility. Very little maintenance took place.

The involvement of the Civic Society

We watched with increasing dismay as St Michael’s deteriorated year by year. This is an important City Church, Grade 2* Listed, part 15th century and part Georgian. Some four years ago we held discussions with the City Church, at that time a possible user of the church; we offered support from the community for funding bids but eventually nothing emerged.

Around that time we met with Veronica Lyell (and others) from Christmas Steps Arts Quarter and jointly kept up pressure on the Diocese to do essential maintenance, especially the clearance of gutters and downpipes, and to make the church secure. Eventually scaffolding was finally erected in autumn 2016.

We floated the idea of the Civic Society being granted a licence to occupy – for up to two years – with the intention of the Society opening up the building for workshops and events in order to publicise its potential for longer term, even permanent arrangements. We met with representatives of both Church Commissioners and Diocese to pursue this idea.

The fire that changed it all

I was away in Shropshire on Sunday 16th October 2016 when the BBC called me requesting the Civic Society’s reaction to the major fire in Bristol City Centre. It was not a great surprise to learn that St Michael’s had been set alight by squatters. We had been warning the Diocese for a long time that their security arrangements were inadequate. The roof was largely destroyed and the rest of the church building severely damaged.

We quickly realised that St Michael’s still had great potential and could be saved and restored. We called a public meeting in Spring 2017, leafleting the surrounding roads and attracting a crowd of well over 100 residents and businesses. Fortunately, Bristol University generously provided a very large lecture theatre in the Wills Building. The meeting was unanimous in its support for saving and restoring St Michael’s.

As a consequence, we established an Action Group jointly with the Architecture Centre, Christmas Steps Arts Quarter and local residents. Our aim was to keep St Michael’s as a building for public uses, based around a flexible performance space. As part of our approach we teamed up with St Michael’s Memorial Parish Hall Trust, located adjacent to the church.

In order to stimulate ideas and to enhance the profile of St Michael’s we decided to hold a limited Architectural Competition. The Civic Society offered a prize of £2,500 for the winning entry. Sean Redmond of architects ph3 was successful (ph3design.co.uk) with innovative ideas and very attractive designs.

As we developed our proposals the Diocese unexpectedly put St Michael’s on the market in October 2017 for a freehold sale. We were almost ready and quickly decided to put in a serious bid for purchase. Who better to restore the building?

Our bid was submitted in mid December 2017, our financial offer was the princely sum of £1, a realistic amount for a severely fire damaged building with future restoration options hedged by planning restrictions and covenants. We were called to interview in mid January – at the Bishop’s House in Winterbourne – where we were questioned and challenged for 70 minutes by representatives of the Diocese, Church Commissioners and property agents.

We are promised a decision in late March / early April.

Other St Michaels on the Mount posts