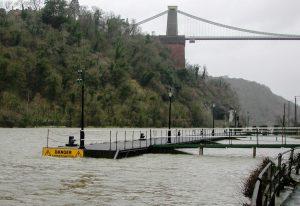 Bristol’s city centre is vulnerable to the risk of both tidal surges up the River Avon and downstream river overflow from rainwater. Bristol Council has been consulting on the strategic approach to addressing this joint risk.

Following technical advice, the Council has concluded that downstream measures (a flood barrier) and upstream measures (natural interventions) are insufficient, and that raised defences are needed along city centre waterways.

The society has responded to the consultation.

The main points are:

The consultation is here. One of the consultation documents illustrates what the flood defences might look like at various waterside locations in the city centre – details here.