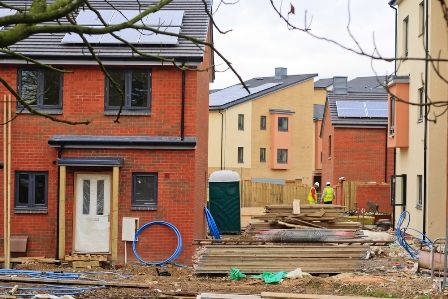 It isn’t just students who are moving into the central area either. Many of those coming to Bristol as students end up liking the place so much they stay on and make careers here, boosting the pool of well-qualified professionals and talent in the city.

Besides any general migration into the city, the biggest factor in the huge demand for new households is in the way we are living. There are just more of us living much longer. The average size of household has fallen with many more single-parent families and single people living alone.

Young professionals have been moving back into inner cities, gentrifying areas that were in decline. Car ownership is no longer ‘cool’, and is actually in decline among the 20-30 age-group, who prefer to cycle or use public transport.

However the supply of completed homes has slumped to an all-time low, with only 878 completions in 2012/13. Demand far outstrips supply, with over 14000 people on Council waiting list.

It is not surprising then that the last decade has seen a trend for large, high-density residential developments in or close to the central area. The huge development at Wapping Wharf is taking shape, with applications for major sites in the pipeline at Temple Quay and Temple Quarter. A massive population increase is taking place in the city central area, coming full circle from the post-war exodus to suburban estates.

Bristol City Council has a local housing target of some 26,400 dwellings to be delivered in Bristol between 2006 and 2026.

The SHMA (Strategic Housing Market Assessment) report carried out for the West of England group of local authorities in 2009 analysed the region’s housing needs and came up with some worrying conclusions.

Despite relative affluence of the city, the difference between average earnings and average house prices is greater here than almost anywhere else outside the London area. There is a huge demand for ‘affordable’ housing. This is defined as social rented housing, or property sold on a shared equity basis, to eligible households on a less than market rate.

Typically, a planning application will require a developer to make 10-35% of the units on a development affordable. However, a developer will often claim that this makes a development unviable, and the council is obliged to waive it, as has happened on several sites. The SHMA predicts an annual demand of 1526 affordable units out of a supply of 1501 new builds, or 102% of all new builds, which is obviously not viable.

This leaves Bristol with a mighty problem.

Aware of this problem, in 2013 the Mayor set up a Bristol Homes Commission to report and recommend positive actions. The final report of the Commission was presented and accepted at the Cabinet meeting in August 2014.

One of the issues is that the crisis is not unique to Bristol, but is part of a national issue. Housing supply must be seen in the context of Bristol’s place at the centre of the sub-region and one recommendation is the formation of a WoE Homes Agency.

A number of key recommendations have been made, including:

Some commentators have suggested that radical changes in land supply are needed. Speaking at the BCS event on July 9th, Paul Smith suggested that the Green Belt needs to be sacrificed, the prospect of joining up to peripheral towns such as Keynsham must be contemplated.

Those unloved tower blocks may come to be seen as a blessing in disguise, providing a valuable and unexpected source of relief to our housing problems. The unexpected market forces, not part of any carefully constructed Strategies, may well make a positive contribution. The Society has generally been supportive of these changes.

But will the urban infrastructure be able to cope with this new population. Where are the medical facilities, the schools, all the other facilities? Perhaps conversion of City Hall to a primary school might be needed?

One thing is certain, those precious green spaces, those jewels, Brandon Hill, Queen Square, Castle Park must be protected like never before.