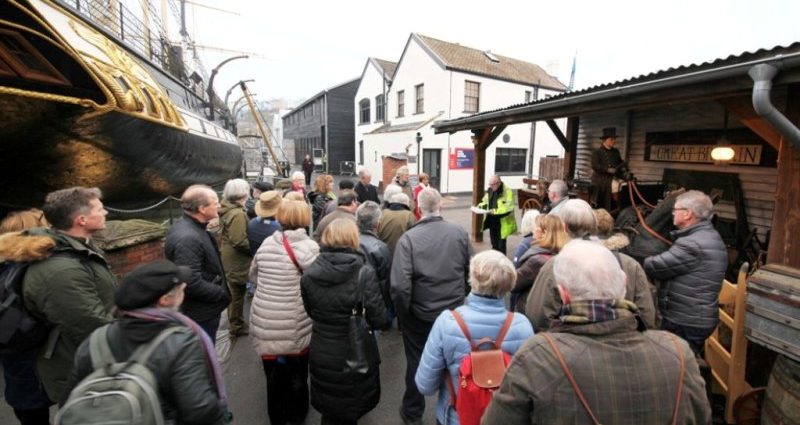 Ahoy there! It’s Tuesday 9th January – and for around twenty-five Civic Society members, time to board the world’s first iron-hulled, ocean-going, propeller-driven ship. Well, some of us went on board the SS Great Britain at the end of the tour but the main purpose of our visit was to hear about exciting development plans well under way on the quayside.

Those little buildings which flanked the ship’s hull and were visible from Hotwell Road have been rebuilt. They take the same form and massing as their predecessors and so don’t obscure the ship. And so, from April, a former timber yard office and Brunel’s drawing office will become the Being Brunel museum. It is currently being fitted out at a cost of £2 million. We strolled along the quay and Mike Day, Being Brunel Project Manager described some of the 14,000 items from the vault that will be put on show here. Visitors will discover facets of Brunel: engineer, entrepreneur, a celebrity and an artist.

We went into the Brunel Institute to learn about volunteering opportunities on the ship. Matilda Wallace, Volunteering Manager is keen to expand her ‘crew’. She offered us a chance to help inform and assist visitors, 200,000 annually – 17 per cent of them from abroad. There’s also a vacancy for a costumed interpretation role – as Brunel’s Chief Clerk!

Two volunteers told us of their experiences working on board and we were press-ganged with an impressive promise – free parking there while you work.

Thanks to Nic Billane for arranging this glimpse of what promises to be a thrilling addition to complement one of the world’s great historic ships and the pride of our city.