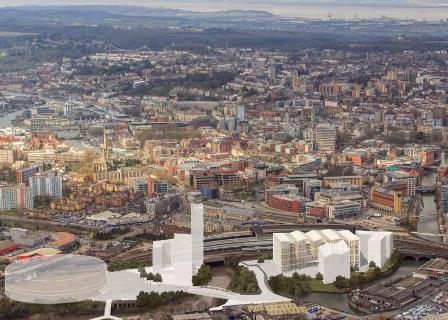 The University has applied for outline planning permission for a new science/engineering led Campus. The Council has agreed to demolish the former Post Office Parcels Sorting Office to enable the University to build on the former Cattle Market site two buildings of 8 and 9 floors to give approximately 43,400 sqm and 7,900 sqm of University space and two student residential buildings of 10 and 12 floors. Three student residential building of 11, 18 and 25 floors are proposed on Arena Island. The site would accommodate up to 1,500 student rooms and provide ground floor commercial space of approximately 7,050 sqm. The Society assumes that some of this space would be made available for medical services and children’s nurseries. This will be a mainly graduate community, with a population larger than that of many towns.

The Society supports the planning application, we are encouraged that the planning boundary includes the Totterdown Basin and Cattle Market Road. A partnership with the neighbouring landowners, the Council and Network Rail is critical to the scheme’s success. The Society is disappointed that the Council will demolish the former Cattle Market Tavern, which could create an individual statement on a human scale, a blend of the old and new in the spirit recommended in the Enterprise Zone Spatial Framework.

The Society is neutral about the proposal to construct tall buildings; the east side of the river may be an appropriate site. The Council and University have agreed suitable viewpoints to assess the impact of the tall buildings. The Society was heartened by the University’s commitment to deliver high quality architecture. The tallest building gives an opportunity to create an internationally recognised symbol of the University and the City’s aspirations; an image that and University and the City would be proud to reproduce in their publicity. A design to match the Wills Tower would be impressive. The group of new buildings could create an impressive entry to the city from the railway. The prominence in the Enterprise Zone and the importance of this development requires exemplary architecture. The masterplan contains ambitious proposals create high quality public space and recreation areas on both the Cattle Market and the Island sites.

The Society has raised these concerns: