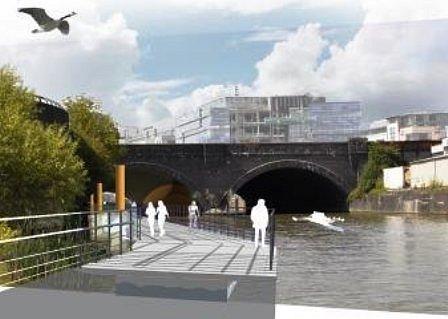 The Society supports the ‘Temple Greenways’ proposals for pedestrian/cycle routes near the to-be-developed arena site, at the back of Temple Meads station. The proposals are a further element of a series of developments around Temple Meads station, and may be found on the Temple Quay Enterprise Zone website.

The proposals consist of pontoon walkway/cycleway linking Temple Meads station to the arena, and a re-working of Cattle Market Road opposite the arena site.

The pontoon walkway along the river is an interim solution that needs to be built in time for the opening of the arena in 2017 – before the nearby waterside sites have been redeveloped, notably the site of the former Royal Mail sorting office, enabling access to the arena directly from the rear access to the station and the Station Street through route underneath it. One end of the walkway is at Totterdown Basin, and the proposals provide a welcome opportunity to enhance this underused public space, and possibly to create a ferry stop close to the arena.

The Society would have preferred to see the proposals in the context of both an arena access strategy and the bigger picture of the longer-term delivery of improvements to the whole Temple Meads area.