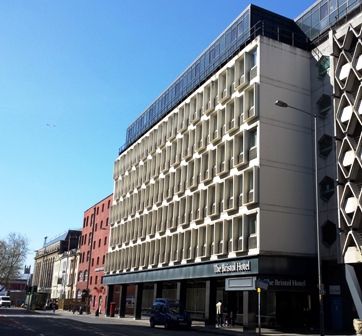 The Planning Applications Group (PAG) has objected to several proposed signs, usually because they would be too large or too bright.

Lloyds Bank proposed some crassly bright, jarring signage for their branches in sensitive parts of the city. These were often in rather handsome buildings. Around half the applications were refused, which is better than nothing.

Bristol Hotel (formerly Jury’s) in Prince Street wanted to put up a large internally-illuminated sign on their roof. This would be pure advertising in a sensitive area overlooking the Floating Harbour. We objected, and were supported by the planners, and it was refused.

PAG mounted campaigns against two Digital LED advertising screens – one at the corner of the Galleries, and another by Bath Road Bridge, Temple Meads. These screens can have a grossly harmful effect, especially at night. We had good support from a local residents group, and a useful piece on BBC Radio Bristol. The applications were refused.