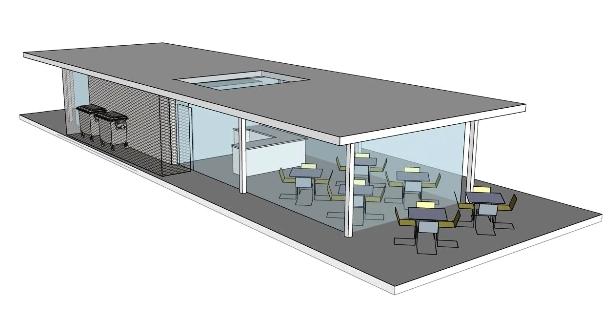 An application for planning permission was submitted to the Council early in 2018 to demolish the public toilets at Seawalls on the Downs and replace the building with a café incorporating new toilets (ref: 18/02629/F). The Society welcomed the demolition and replacement of the unsightly toilets. We were also broadly content with the contemporary design of the proposed replacement. However, we had concerns about the precise location of the new building and, in particular, the lack of analysis of its impact upon views within, into and out of the Downs without which we felt unable to judge whether any harmful impacts of the proposal outweighed its potential benefits. We submitted that it was our feeling that the building would be better located on the site of the existing toilet block extending southwards so that the drinking fountain is immediately next to the new building. Viewed from the Downs, it would be less conspicuous against the background of existing trees.

Following concerns from a number of sources as well as the Society, this planning application was withdrawn. Subsequently another application was submitted (18/04727/F). The second application met the Society’s main concern almost completely. It also proposed a single storey building  whereas the earlier application proposed a seating area at first floor level. This reduces the visual impact of the building. The Society also prefers the improved visibility allowed by the proposal of the path running behind the building. This will enable greater natural surveillance of this path and discourage anti-social behaviour. We, therefore, submitted no objection to this proposal and it was granted planning permission in March 2019.

As the Downs is a registered area of common land, national approval for the proposal is also required under Section 38 of the Commons Act 2006. An application submitted in 2019 has been rejected by a planning inspector, but a revised application was submitted in January 2020. The Society knows of no reason why approval should not be forthcoming but does not have expertise in Commons Act issues.