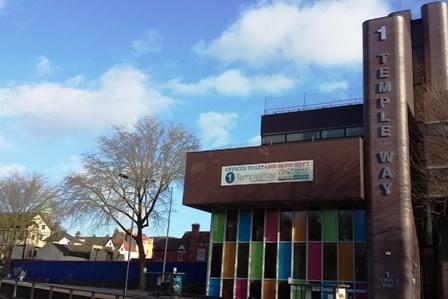 When the Daily Mail Group began to print the Post in Reading, they demolished the former Print Hall in Temple Way. The site is vacant. The scheme would build 270 en suite student rooms with shared catering and amenity spaces, including a fitness facility. The Old Market Residents’ Association and the Society welcome the reuse of the site and agree that it would be suitable for student accommodation. To design a building in the urban context is very difficult. The ‘brutalist’ blocks of the Post Building to the south contrast with the three floors, 17th century Stag and Hounds public house to the north. The east faces the turn of the 20th century Shepherd’s Hall across the David Street service land, while the ironically named Old Market roundabout dominates the western aspect.

The scheme will consist of three blocks. The first will be a ‘veneer’ that will cover over the ugly black painted end gable of the Print Hall. The second block will be equal the height of the Post Building. The third block will step down to correspond to the ridge of the Stag and Hounds. The ratios between the window bays and the window frames on the Old Market elevation will respond to the fenestration of the surviving heritage buildings. There will be major improvements to the public realm. The development will restore the historic alignment of David Street, which runs south from Old Market. The historic alignment of Jacob Street ran parallel to the south of Old Market until the Post Building and Print Hall severed it. The development will reinstate Jacob between its junction with David Street and Temple Way as a pedestrian route between the ‘veneer’ block and the taller block.