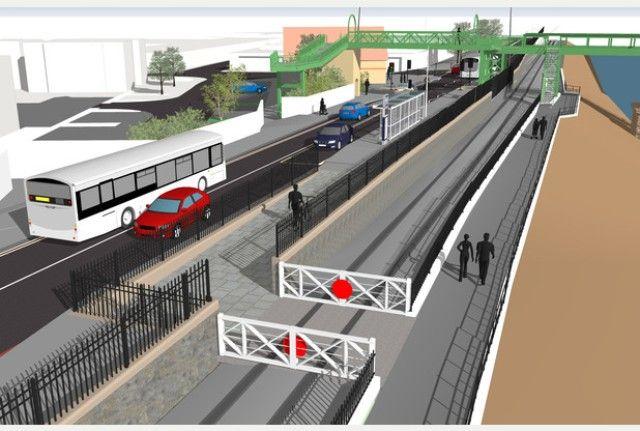 In 2012, the Government held a public enquiry into the Ashton Vale to Temple Meads Metrobus (AVTM) route. The graphic (above) shows its original one-way, anti-clockwise route.

The concrete guided bus track left the Long Ashton Park and Ride (LAPR) and crossed the Portishead rail track via a new flyover. It then travelled along the former Docks Railway route under the high-level roads and crossed the restored Ashton Avenue swing bridge.

At the public enquiry, James Smith, society spokesman for transport, gave evidence that the Bristol Civic Society objected to buses travelling through Wapping Wharf and over the Prince Street Bridge. Buses would harm the Docks Conservation Area, which attracts more than one million visitors a year.

What has happened since?

The Government has not explained why it has failed to publish the government inspector’s report, which was due in May. Bristol mayor George Ferguson decided that buses must not run along the rail track beside the New Cut, through Wapping Wharf or over the Prince Street Bridge.

Bristol City Council (BCC) then chose an alternative route. At Avon Crescent, the guided busway would join the public roads. AVTM would then travel along Cumberland Road to avoid the rail track next to the New Cut and Wapping Wharf. The bridge across the Bathurst Basin lock would be doubled to take AVTM into Clarence Road and then down Redcliffe Hill to join the one-way central circuit, as previously planned. Through the Mayor’s action, the Society has achieved its aim.

The estimated capital cost to build the bus track is £51.5m. The Government grant would be £34.5m. Bristol would contribute 80% and North Somerset 20% of the £17m local contribution that the Government requires. The two local authorities would underwrite the risk of any cost overrun.

BCC’s evidence to the public enquiry showed that most 903 passengers travel to the city centre or to the bus station. The AVTM passengers would travel to those stops via Temple Meads and Cabot Circus. Thus there would be a minimal overall travel-to-work time saving for most passengers.

The Society believes that there is a real risk that AVTM will require a permanent subsidy larger than the subsidy currently paid to the 903 operator. AVTM is a 903 bus replacement, not a new transport system. In 2010-11, BCC paid the operator a £170,000 subsidy to run the 903.

AVTM would cost more to operate than the 903 bus. The 903 does not pay to use the public roads, while the AVTM operator would have to pay to maintain the busway. The higher specification AVTM vehicles would also cost the operator more to buy.

The AVTM service would be more frequent and would run on seven, not five, days a week. BCC concedes that AVTM would require subsidy for an initial period, while the interest on the government loan to raise the £13.5m local contribution will be a charge on BCC’s general debt. It will not be charged against revenue from passenger use.

The promoter’s evidence to the public enquiry showed:

The evidence to support the assertion of a 40% rise in use over four years was: “The Treasury predicts economic growth that will generate that increase of business activity in the city centre.”

The Society’s proposal – an independent audit

Any increase in the ‘903 subsidy’ must be found from cuts to other transport subsidies. When the busway is complete, BCC should not face an operator who demands a ‘903 plus’ permanent subsidy to avoid the political embarrassment of an empty busway.

BCC should immediately commission a report into the AVTM’s projected revenue and operating cost. A body with no interest in the development, such as the council’s auditors, should write the report.

View our Transport & Place-Making posts since 2014