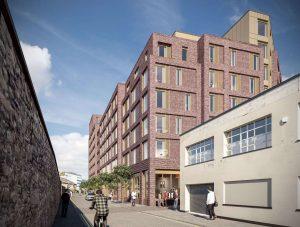 The Watkins Jones proposal for the development of the triangular site between Gas Lane and Freestone Road, is for 387 student bedspaces, including communal facilities, bin and bike stores. No parking spaces are included. Recreational space is provided on a sixth floor terrace and an inner courtyard. Two flexible commercial units are proposed accessed from Freestone Road.

The Society cannot support this scheme. We regard it as premature until there is a clearer strategic view of the overall development of the St Philips Marsh area. The Society acknowledges that there is a master plan for the Silverthorne Island area included with the proposal. However, the Society considers that a master plan for the wider St Philips area should be brought forward which would cast light on the mix of development, supporting services and open space.

We find the layout and proposed height of the development unsupportable. The perimeter form would result in a very shaded and unattractive courtyard space. It would also present cliff faces to Freestone Road, Gas Lane and the north/south route adjacent to the east end of the development. To the north, the Society considers that this would adversely affect the proposed development on the north side of Freestone Road particularly the lower floors. In Gas Lane the combined effect of the high façade and the historic wall on the opposite side would result in an unpleasant ambience for pedestrians and cyclists using the road. This is particularly important as we understand that Gas Lane is intended solely for cyclists and pedestrians. While there might be an opportunity for some higher elements in a development on this site, we strongly suggest a generally lower approach which is sufficiently divided into blocks to allow light into and through the site.

The Society has not commented at length on landscape and public realm issues as we consider the harmful impacts of the proposal to be to severe to be sufficiently mitigated by such improvements. Nevertheless, the planting of a row of trees on the adjacent Gas Lane pavement is a very minor contribution in the context of the proposal. However, there is a great need for public realm improvements in this area to encourage pedestrian and cycle movements. We are also aware of the attractive fan patterned cobbles on Freestone Road. These should be protected in any proposal. The narrow pedestrian tunnel leading north from Freestone Road to Dings Park is also in much need of improvement.