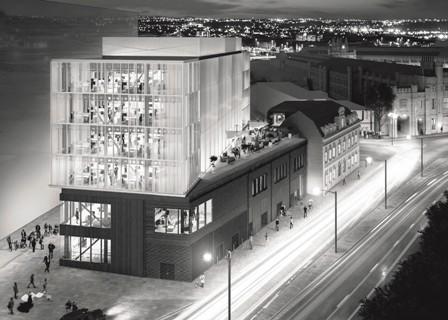 The Council will soon begin work to replace the Temple Meads gyratory with a simple light controlled junction at the crossing of Temple Way/Redcliffe Way and Victoria Street/Temple Gate. The Society strongly supports the Council’s ambitious plan to improve this blighted area. Temple Quarter is an important approach to the city and a prominent element in the Enterprise Zone and Arena developments. As part of its long-term strategy the Council has acquired for demolition the dreary block that includes Temple Gate House to upgrade the cityscape and improve the degraded contemporary view from the Station Approach. The architectural setting of the Station Approach gives the first-time visitor leaving the station a poor impression of the city. The area cries out for imaginative redevelopment and architecture that is informed by the surviving architectural context.

Skanska have made a planning application to redevelop the derelict Island Site between the George and Railway Hotel and the Grosvenor Hotel together with the land that the road realignment will release for development. Engine Shed 2 would retain the George and Railway to deliver office space with cafe/restaurant uses at street level. The Society supports the site’s redevelopment but regrets that it cannot support the proposed, seven-floor equivalent, height of Engine Shed 2. The Society’s primary concern is the impact of the development on the setting of the Grade 1 listed Temple Meads Old Station (the Old Station), a nationally important group of buildings, and the Grade II listed George and Railway. The Society welcomes the inclusion of the George and Railway but is distressed at the way the Hotel would be overshadowed by Engine Shed 2. The mass of new building would render the context for the listed building meaningless. The retained Hotel would be reduced to a nominal gesture to conservation; an afterthought next to the mass of the new building. The relationship between the proposed building and the Grade I listed Old Station would be out of scale. Engine Shed 2 would dominate the south side of the junction of the Temple Gate highway scheme and the setting of the Old Station. The Society supports the innovative architectural approach to the new development. The design of the glass cube attracted compliments.