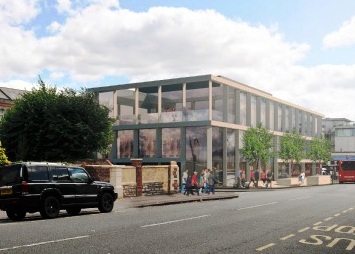 Following advice from the Council the developer has withdrawn the proposal. The Society waits to see whether the developer produces a further scheme that meets the criticism of the earlier schemes.

THAT Group proposes to demolish 2-16 Clifton Down Road and redevelop a range of retail units, offices and cafe/restaurant space. This Clifton Village site is occupied by a small group of retail units built in the 1960s that are now vacant. There is a lengthy planning history. In 2015, the Council refused planning permission because the design was not good enough. In September 2016, the Society told the developer that its first proposal overdeveloped the site: the front elevation would look like a cliff facing Clifton Down Road. (This attracted a great deal of public comment on our website report.) The Society supports the revised proposal, subject to suggestions to improve the design.

The added space will increase footfall and will benefit all the nearby businesses. The changes to the September 2016 proposal removed the top floor and set back the Clifton Down Road elevation to make room for trees, landscaping and seating. The main planning issue is the design of the building. A new building in this location must be a good neighbour to the surrounding buildings, which frame it. The height is now the same as the Clifton Arcade, which is immediately behind on King’s Road. To be successful, a building on this conspicuous site must fit in and blend well. The neighbours are not all “Georgian” or “Victorian” buildings; they have a wide variety of styles.

A consideration that was missing from the developer’s display boards is the impact of the proposals on the setting of Grade II* Listed Mortimer House, which is across King’s Road. The Society understands that the design is work in progress. To improve the design of the unrelieved rectangular form the Society suggests the introduction of architectural elements to emphasise the top of the elevation and to reinforce the end bays to provide an architectural frame for the facades. The corners of the building are important areas for the overall appeal of the building design. Architectural elements within the bays would create vertical articulation and introduce variety. The recession of some of the windows could be another element to add visual interest to the rectangular facades. The developer offered three choices of different treatments and materials for the elevations. The Society said that the stone/ceramic façade with pronounced horizontals and vertical fluted mullions was the most attractive.

To locate this site, use this link to the Google map of the area..