In true Hollywood style, following on from the success of the November Cinematic Bristol event, there is to be a sequel.

Our apologies to all those turned away at the door last time as the room was full. To avoid a possible repeat of this we are this time taking advance bookings. It is an all-new show but for those who missed the November show we are hoping to screen a re-run in the near future. 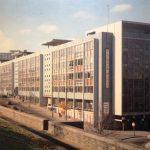 The Rise and Fall of Fairfax House‘. Do you remember this iconic building (right)? It’s often cited as Bristol’s worst. Yet this film paints it in a different light. The filmmaker, Gordon Young, contacted its architect and filmed his original drawings. A thoughtful, affectionate appraisal of a landmark building, demolished thirty years ago and replaced by the Galleries’ car park.

‘A Window in the Sky‘ The Lord Mayor’s Chapel faces the Cathedral across College Green. Its 15th-century west front was rebuilt 200 years ago and the entire original window was transplanted to a Westbury-on-Trym garden. It forms a little-known and really awesome garden ornament.

‘Avon Gorge‘ a celebration of Bristol’s ‘big ditch’, and one of the most spectacular routes to an inland port anywhere in the world. Its history, natural features, industrial archaeology, wildlife and much more are covered. The film features interviews with the late Richard Bland, one of Bristol’s leading naturalists, who died in October.