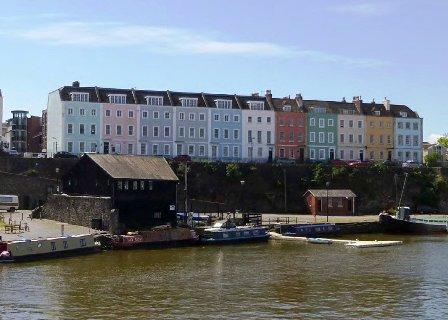 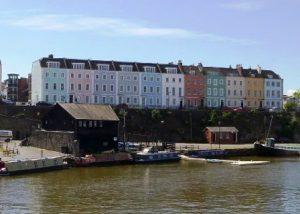 These six listed Redcliffe Parade houses are a conspicuous landmark above the harbour. Currently, they are empty offices. The insensitive 1970s office conversion of nos. 3– 8 Redcliffe Parade West caused significant harm to the previously six separate Georgian townhouses. Behind the houses, running along Jubilee Place (the eastern boundary), is a four-storey 1970s office extension. There is a 2014 planning permission to convert the houses into flats and to replace the 1970s extension with a row of townhouses. A new developer now says that the 2014 planning permission is financially unviable and proposes to retain the 1970s office extension, add a ‘penthouse’ storey, over-clad the extension in metal, add balconies facing Jubilee Place and build a new ‘coach house’ fronting Barossa Place at the rear of the site.

The Council accepts the principle of change of use from offices back to residential. The Council describes the developer’s intention to ‘reinstate the main elevation’ to be relatively minor and says that the proposal fails to capitalise on the opportunity to reinstate an active frontage along Redcliffe Parade West and return this frontage to its original form. The Society welcomes development that attracts more residents to the centre of the city and described to the developer the missing architectural elements of the Harbour elevation. The lost elements include the chimney stacks, divisional walls through the roof, window glazing bars, the original dormer windows, reopening and using the front doors on Redcliffe Parade West and No. 3’s grand Jubilee Place door case. The Council does not support the retention of the 1970s office extension and says that the current planning permission for town houses is a better solution. The 2014 planning consent is a well-thought out and sensitively designed scheme for the site. The Harbour facing flats would attract significant market interest.