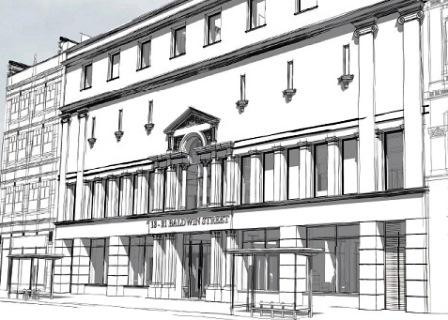 This neglected and semi-derelict building opened as the People’s Palace music hall in 1892. In 1912, it was renovated to become a cinema. Further alterations to the Gaumont cinema followed in 1927 and 1963. After the rejection of a demolition proposal in 1974, the cinema converted to a nightclub. The building closed and has been vacant since 2007. The Society welcomes the reuse of the redundant building, and supports the proposal to provide 93 purpose-built student bedrooms, although it would have preferred conversion to flats.

The Society agrees with the developer that the integrity and importance of the existing facade maintains local identity and outweighs demolition. The City and Queens Square Conservation Area Character Appraisal’s describes it as ‘landmark building’. The original theatre interior was lost long ago. The alterations to the Baldwin Street façade include new window openings on the top floor and the restoration of the upper storeys. The development offers the chance to rework the ground floor. The Society welcomes the restitution of a large central entrance but considers that the ground floor could offer a more active street frontage. The Society has asked whether the patterns of earlier designs offer something more interesting at street level?