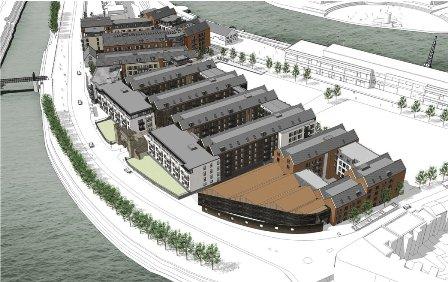 The site is 4.25 Hectares within the City Docks Conservation Area. Wapping Road forms the eastern boundary, Cumberland Road the south, the quayside forms the north and M Shed the western boundary. The New Gaol stood on the site until 1883. The Great Western Railway demolished the buildings and used the land as a coal yard. Today, part of it is a car park. The old Gaol Gate, remnants of the wall and the stable building remain.

In 2004, the developer (Umberslade) obtained outline planning permission for 592 dwellings of which 20% would be affordable housing. The Society supported the principle of development but unsuccessfully objected to the quantity of construction, which it said would overdevelop the site. The site will develop in three phases. In 2013, the Council gave permission to develop blocks A – C, which are now under construction. Phase 1 also includes a new public square to the west of M Shed and a new right of way to lead from Gaol Ferry Bridge to the Harbour. Umberslade recently applied for detailed planning permission to build blocks D – G to provide 326 apartments, office accommodation and three shops. The image shows blocks A – G completed. Phase 3, will fill the empty area to the right of the development in the image.

The Bristol firm of Alec French and Partners are the scheme’s architects; their intention is to create an ‘industrial’ dockside feel. The Gloucester Docks redevelopment is a reference. The Society welcomes the substitution of pitched roofs, shown in the image, in place of the masterplan’s flat roofs. The more interesting, higher roof line will not appear above M Shed when seen from the Centre. The exterior of the principal blocks will contrast render, vertical timber cladding and brick work. The Society doubts whether the timber cladding will achieve the designer’s ambition. Examples of timber cladding around the city have quickly weathered to a dull shabby grey. The blocks could become a depressing sight in poor winter weather. The Society would prefer the use of more durable material than wood cladding.

The legacy delivered by this development will depend critically on the quality of the building materials used. The Cumberland Road façade forms the background to the Gaol Gate and the transition to the heritage elevation the corner plot. There will be close views of the façade from Cumberland Road and distant views from the south bank of the Avon New Cut. The materials of this elevation must be of equal quality to the traditional stone construction of the heritage assets and not weather badly. The Society welcomes the restoration of the former J S Fry and Sons building, bottom block in the image, to become an office.

The Society has suggested reconsideration of the Wapping Road elevation of Block F to ensure that its design its closer to the carefully and sensitively detailed early 19th century elevations of numbers 1 – 8 opposite and to distance itself from its dull 20th century neighbours further up the road.