Pre-application consultations are taking place for proposals to develop the remaining part of the Wapping Wharf redevelopment. The site is between Museum Street and Rope Walk behind M-Shed. At ground floor level a mixture of commercial, hospitality and recreational space is proposed with a view to retaining the businesses currently in adapted containers. Above the ground floor, there would be 240 apartments of varying size and tenure, though predominantly one and two bedrooms. The development is in the form of four blocks rising from 8 storeys adjacent to Wapping Road to 12 storeys at the west end. The 12 storey block is designed partly in a ziggurat form and is intended to accommodate restaurants on the terraces created. A high level of landscape planning is proposed for Museum Street and Rope Walk and extensive planting on the walls of the buildings is also envisaged. The full publicity information is available on www.wappingwharfnorth.co.uk. 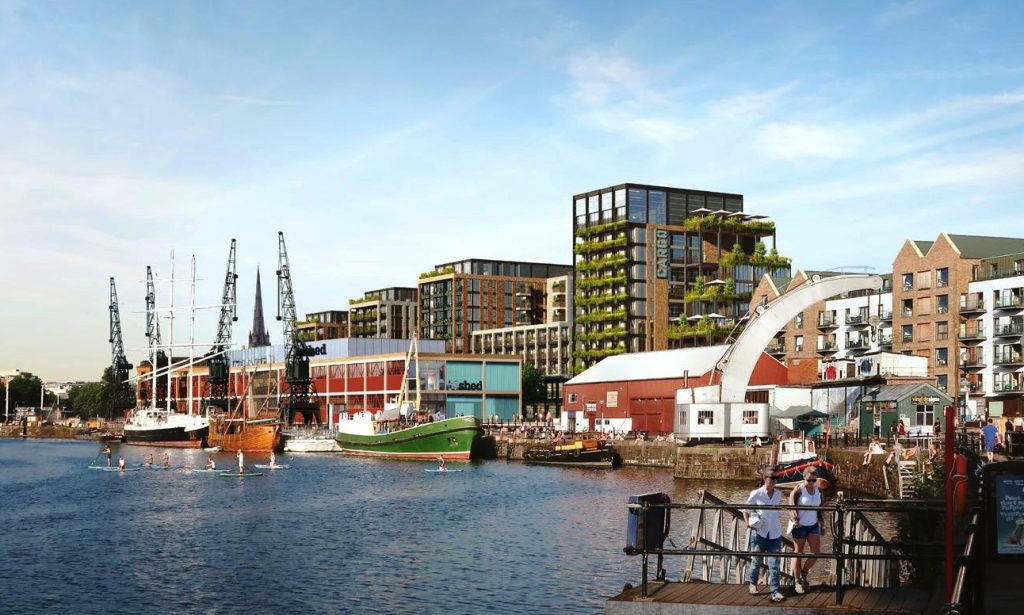 Not surprisingly, this proposal has produced mixed reactions in the Society and our response to it included the main reasons for some members supporting the scheme and others opposed to it. Those supporting the development thought the design, from a developer with a successful track record locally, was very interesting and would contribute to the variety of building styles in the area but the vegetation proposed for the walls would need to be very well planned and maintained. The public spaces created, particularly Rope Walk would be attractive pedestrian areas. It was felt that the mix of uses would contribute to a vibrant community and the commitment to retaining existing businesses was welcomed.

Views against the proposal centred mainly on the height of the buildings. Members were concerned about their impact on M Shed and the cranes, views in the area and their possible impact as a precedent for future developments on harbourside. Flat roofs and the use of steel, glass and plain white walls was seen as a negative design feature particularly if the vegetation failed. There were fears that the relaxed atmosphere of the area could be lost and that some existing businesses might not be viable in the proposed premises. The impact of the development on the town centre economy was also a concern.