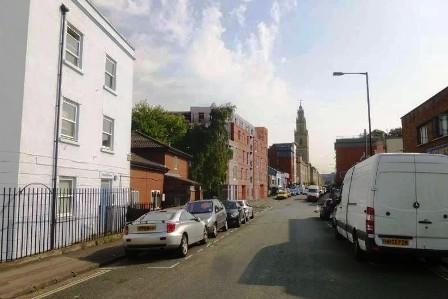 The proposal is to demolish the current buildings to build 42 flats of mixed sizes and 3 split-level workshops to create an active commercial frontage to Wilder Street. The site stands on the north east corner of Dean Street and Wilder Street, St Pauls. It lies just outside the St. Paul’s Conservation Area because it is on the wrong side of Dean Street. The current industrial buildings have no architectural merit.

Although the Society shares the Council’s concern about the loss of employment space, it would support the demolition of the current buildings if their replacement would enhance the adjacent conservation area. Unfortunately, the current proposal is over-scaled and would harm the historic character and legibility of the area. The picture just shows a computer generated image of the proposed building in the middle distance, behind the tree. Any proposal should take into account the local context. Dean Street, viewed from the Wilder Street junction, leads up to, and is subservient to, Portland Square. The proposed building would be built to the back of the pavement in both the secondary streets. The block would double the height of the current buildings and would dominate the narrow secondary streets.

The site has a prominent corner location at the boundary of the 18th century development of Portland Square and its dependent streets, and the more modest 19th century housing development north from Wilder Street. The proposed scheme fails to address the transition in the massing to the later 19th century townscape. The scheme does not make a positive contribution to the to the city and fails to enhance the character and local distinctiveness of the adjacent conservation area.

The Society regrets that it cannot support this proposal. The Society could support a street elevation that is three floors tall, including the ground floor. It would not object to a fourth floor that is substantially set back. The roof should add interest to the skyline.