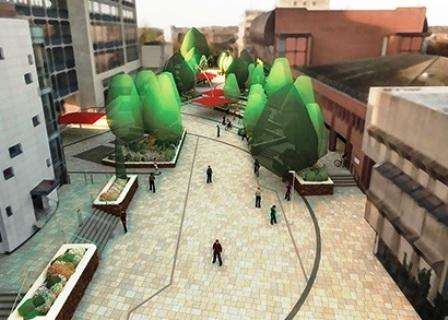 The University has announced that it will bring forward its ‘Tyndall Place Programme’. The first stage is to pedestrianise Tyndall Avenue. The intention is to establish a strong identity at the University’s heart by developing a pedestrian-focused high quality public space. Subsequent projects will refurbish the Sports Centre, the Computer Centre and Senate House, to make it the student services centre, and to build a new University library on the Hawthorns Hotel site. If the Council grants outline planning permission the University will apply for a Stopping Up Order to prohibit motor vehicle use. Pedestrianisation will allow the removal of most traditional kerbs and barriers to movement and the redesign and repaving of the whole area. The 9, 16 and 72 buses would be diverted to St. Michael’s Park from Tyndall Avenue. To permit widening St. Michael’s Park the University will transfer land taken from service areas behind University buildings.

The Society supports the principle of the scheme and agrees there is the potential to create an interesting public space. These are some of the issues that the Society raised that affect Bristol residents. The Society supports pedestrianisation, with cycle access. It would generate local goodwill if the University absorbs the loss of the Tyndall Avenue parking bays from the permits that it allocates to staff. There is a strong local perception that Tyndall Avenue would become an ‘exclusion zone’. Many residents feel unwelcome in areas surrounded by University buildings where students dominate. The assertive signage of University buildings contributes to this reticence. Far from seeking to exclude the public the University says that it welcomes public access around it campus. The University could overcome the public perception with considered naming, signage, legible public realm and the behaviour of security wardens. It is important for the public to feel welcome to use the area.

The Society supports the proposal to blur the boundary with Royal Fort Gardens but we are anxious that the design should be kept simple, clear and almost formal. This is a wide space flanked by large institutional buildings and free of traffic. A bold and simple layout using trees would create a classy new public space, flexible in use and economical to construct. The ‘indicative’ design for Tyndall Avenue does not suggest this sort of clarity but an attempt to create a quirky, curvy, broken up space. A lesson to be learnt from the recent public realm improvements in Royal Fort Gardens behind the Life Sciences building is not to ‘overdesign’ a new public open space.

August 2017 update: The Society has responded to a second, more detailed, presentation of the scheme. Whilst we support the changes in principle, we are not convinced that the proposals yet provide a coherent vision, demonstrating how physical design and a place for people and activities come together. We have also addressed the question of public access, both the legal situation and the measures to make the public feel welcome.”

December 2017 update: The Society has responded to the University’s application for planning permission to close Tyndall Avenue to through traffic, to widen St Michael’s Park to accommodate diverted traffic, and other enhancement works. The Society supports the principles behind the scheme. There is the potential to create an interesting space that the public could share with the University. The Society welcomes the pedestrianising of Tyndall Avenue and the proposal to blur the Royal Fort Gardens boundary. This scheme together with the forthcoming changes around the Hawthorns site, will provide an identifiable centre for the university.

Although the Society supports the changes in principle it regrets that it cannot support the current scheme. The proposal is over designed, which gives the impression of a private space closed to the non-University public. The graphic paving pattern, the curved build outs and planting will create a barrier that will confuse the public and create a belief that Tyndall Avenue is private space.

March 2008 update: a planning application has been submitted. Whilst the Council supports the scheme in principle, its Highways department has rejected St Michael’s Park as suitable for buses, so further discussion is needed between the University and the Council.