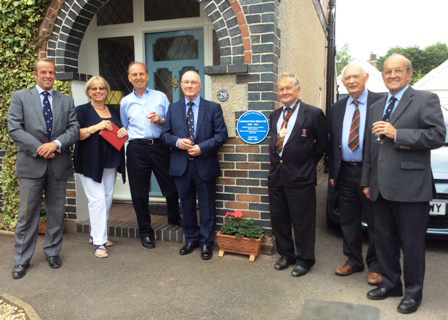 A blue plaque honouring a Korean war hero was unveiled on 28th June 2016 at 29 Stoke Grove, Westbury-on-Trym, the childhood home of Terry Waters. A young lieutenant in the West Yorkshire Regiment, attached to the Gloucestershire regiment, Terry Waters was captured after the Battle of the Imjin River in April 1951. He was seriously wounded in the head and arm.

Terry and his men were imprisoned in notorious caves near Pyongyang which the Chinese and North Koreans were using as a POW Camp. They endured dreadful conditions with just two meals of boiled rice each day and no medical attention. The prisoners were asked to be active participants in the propaganda movement against their own side with a promise of better food and medical treatment – they refused unanimously. But Terry ordered his men to pretend to accede to the offer in an effort to save their lives. But he refused to go himself. He told his men that his refusal to sign was motivated by the fact that he held the King’s Commission.

The North Koreans tried to persuade him to save himself by joining his men. Terry steadfastly refused to do so, and he died sometime in June 1951. He was 22 years old; his birthday had been just two months earlier, about the time of the battle.

Terry Waters set an example of the highest gallantry so it is fitting that he was awarded the George Cross. It is ranked equal to the Victoria Cross, which is awarded for valour in the face of the enemy. Terry’s decoration was specifically awarded not for courage in the heat of battle but for his courageous stance in captivity. In awarding the decoration the deed is cited as ‘fortitude as PoW’.

Terry had been a pupil at Bristol Grammar School and the school’s former pupils’ organisation, the Old Bristolians Society, funded the cost of the plaque. Some Society members attended the plaque unveiling along with the residents, Mr and Mrs Ray.