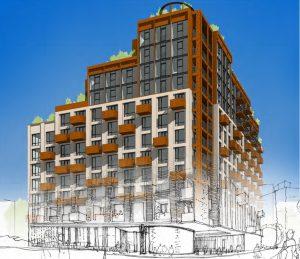 The image shows the site on the corner of Somerset Street and Prewett Street. To the right stands the Doubletree Hotel on Redcliffe Way with St. Mary Redcliffe further into the photograph. The scheme would comprehensively redevelop and regenerate a brownfield site between Proctor House and Broughton House; part of the Council’s Redcliffe estate. This is a highly sustainable location, close to the city centre and Temple Meads station. A market rental managed scheme would expand the area’s accommodation mix. The scheme would build 176 flats, 53% would be two-bedroom the remainder one-bedroom with 20% affordable housing.

The Society welcomes redevelopment in principle but regrets that it cannot support the current scheme. The new apartment block would overbear and overshadow Magdalena Court to the north and Corinthian Court to the east and would block the sunlight for a substantial number of neighbouring residents for a significant part of the day for most of the year. The Society believes that the development would harm views including views of St. Mary Redcliffe.

In the Society’s view, the quality of the design does not justify the height and mass of the principal building which the asymmetrical silhouette fails to mitigate. In the public realm the building’s mass would overpower the space within which it would stand. Only the corner flats are double aspect and many of these single aspect flats would face north. 47% of the flats would be one-bedroom; the data for the central wards shows that approximately 77% of the housing stock is 1 or 2 bed units. To achieve a high density the Society would prefer a development on a broader footprint built over the centre of the site that was taller, but not much taller, than Corinthian Court and Magdalena Court a possibility that the developer has not explored.