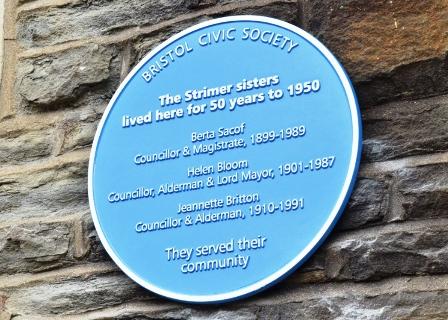 The first Blue Plaque to be unveiled since the Civic Society took over running the scheme from the Council was unveiled by the Lord Mayor on Saturday 17th October 2015 at 8 Cranbrook Road, Redland. It was to recognize the work of three Strimer sisters who lived there. Eugene Byrne writes:

The sisters Berta Sacof (1899-1989), Helen Bloom (1901-1987) and Jeannette Britton (1910-1991), born Berta, Helen and Jeannette Strimer were from a comfortable middle class background in Bristol and led completely conventional lives until they seem to have had a collective political awakening in the 1940s.

They went on to lives of tireless political and community activism. For a while, all three were simultaneously Bristol city councillors; two became aldermen and one became Lord Mayor. Sitting on various council committees and other local organisations they played a significant part in shaping modern Bristol in everything from health and education to criminal justice.

Use the following link for photographs of the unveiling on our Facebook page.