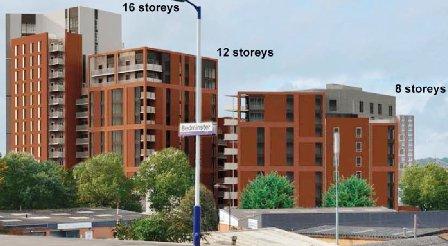 St. Catherine’s Place Bedminster – the Society’s response to a planning application to construct 188 one and two bedroom flats and street level commercial units.

The Society supports the proposal to demolish and redevelop unattractive buildings on this site and to build new homes. Unfortunately, the Society cannot support the current scheme. This is a major scheme but the accommodation would be more small flats, which dominate this part of Bedminster.

An earlier planning regime left Bristol with a legacy of unpopular, poor quality tall buildings. The Council has demolished some of tower blocks that are widely scattered across south Bristol and has refurbished others. The Council would not build these isolated tall buildings today. The scheme, which would be taller than the Colston Tower, would stand alone. In 2005, the Council’s adopted a Tall Buildings Policy, which permits new tall buildings in the commercial centre of the city. Because tall buildings fail to integrate into the urban landscape, there is a presumption against tall buildings elsewhere unless the building has ‘exceptional qualities’. This scheme’s design repeats many of the failings of the 1960s point blocks and is not ‘exceptional’. The scheme is a retrograde design, which compares unfavourably with, for example the recently completed Junction 3 development. Junction 3 shows imagination, achieves a satisfactory density, and offers an attractive public realm and permeability.

The Society would prefer to see a low or medium rise approach that could achieve a high density within a perimeter block. A medium rise perimeter block could create public and private open areas within the site protected from the surrounding traffic. It would provide a human scale scheme facing the surrounding streets. Front doors and windows onto the street would provide animation and surveillance in the public realm and would enhance Bedminster’s residential character. A medium rise scheme would give a better housing mix and would provide family housing in an area where it is needed. A mix of accommodation would build a more stable and sustainable community without reducing the number of new homes.

The Planning Officer’s report recommended that the Planning Committee refuse this application. However, the Committee overruled the advice and has granted planning permission.