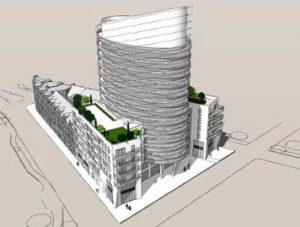 The development proposed in this outline planning application faces the Lawrence Hill roundabout; bottom corner right in the image. Lawrence Hill runs from the bottom to top left. Easton Road forms the third side of the triangular site behind the block of buildings.

Although the Society strongly supports redevelopment that would refurbish and reuse the neglected Victorian buildings with their fine engineering brick elevations, we regret that we cannot support the erection of a new 6-storey perimeter block with a 15-storey central tower at the roundabout end of the site. There are no tall buildings in the Old Market Conservation Area. The recently adopted Neighbourhood Development Plan does not propose the introduction of tall buildings in the conservation are.

This is a constrained site of 0.21 hectares. The proposal includes 122 new 1-3 bed apartments which would produce a density of 580 dwellings per hectare. There are always questions at this density level about the quality of the amenities offered to the future residents. There are 63 single bedroom single person flats, nearly 50% of the total. Single person flats are inflexible. There is no courtyard for the residents’ amenity. High level terraces appear superficially attractive but are subject to practical shortcomings. They are weather dependent particularly to wind speed which increases above ground level. The terraces would be immediately above the noise and fumes of arterial traffic. The few flats that have balconies face east and overlook the roundabout.

Among other shortcomings are that many of the flats are single aspect, some north facing. The Society agrees that the conceptual design of the tower has architectural merit, but the site is unsuitable for a tall building. However, the site could accommodate a marginally taller element as a focal point if it is integrated with the whole the island site.