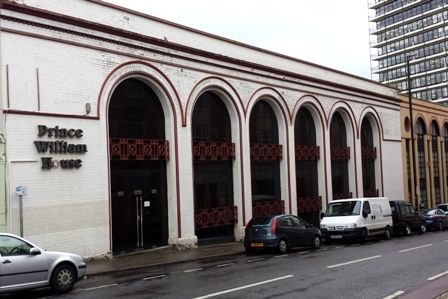 This entry relates to the significant changes to the scheme that followed the earlier public engagement.

Urban Creation proposes to convert these long empty offices into 80-85 student bedrooms with laundry facilities, common room, bicycle hub and bin store. The Society agrees with the developer that the site could provide highly sustainable student accommodation and does not object to an extension at the rear of Prince William House. The Society welcomes the proposal to reuse these long empty offices and the removal of the disintegrating white paint that currently degrades the facing brickwork.

However, the Society remains concerned about an aspect of the proposed Colston Street elevation of Prince William House, which is Grade II listed. The Society does not object to the removal of the modern plate glass and the wrought iron transoms. The revised scheme has improved the placement of the windows of the student units, which may be the best that can be achieved. The Society remains unconvinced by the introduction of a metal mesh screen to fill the whole area beneath the arches. From an oblique view along the street, the mesh would appear as a blind metal infill, which would intensify the already sterile quality of the section of Colston Street. The Society now has no concerns about the Host Street elevation following the design changes.