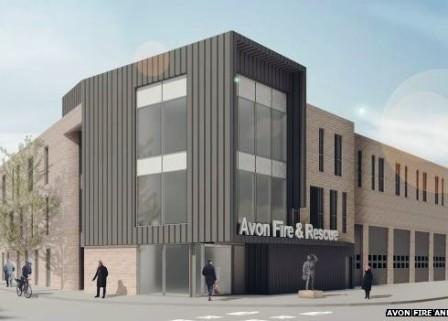 Redevelopment proposals for the Central Fire Station Temple Back

Avon Fire and Rescue headquarters occupy a large site between Temple Street and Temple Back. The Service’s headquarters will move to Keynsham and sell the remainder of the site. Unfortunately, the Service does not looked beyond its immediate operational needs to consider the wider opportunity that it will create. The Service could have offered the whole site for redevelopment and required the purchaser to construct a new fire station. A comprehensive development could have been to the Service’s substantial financial advantage but that opportunity is probably now lost. The Society supports the demolition of the current uninspired building. The proposal does not make good use of the site; the fire station would continue the current, low density use.

A more imaginative design solution could incorporate the fire station within a larger building, which would be more efficient land use. The replacement design is bland and without character and no better than the building that it would replace. These elevations would not be lively. The brick street elevations would be unrelieved by any architectural feature. There is no boundary to mark the top of these elevations; there are no features on the walls or around the window and door openings to create recession or forward elements to throw shadows. The Society suggests that metal sheeting is incompatible with a major civic building. The Society is disappointed that the roof does not treat the roof as a ‘fifth elevation’. Another flat roof would not add interest to the skyline. The Temple Back area is full of dull commercial buildings. This redevelopment is an opportunity for a public authority to create a civic building that would reflect the city’s pride in its Fire Service.

To the Society’s regret, the Planning Committee granted this building planning permission on the Planning Officer’s recommendation.