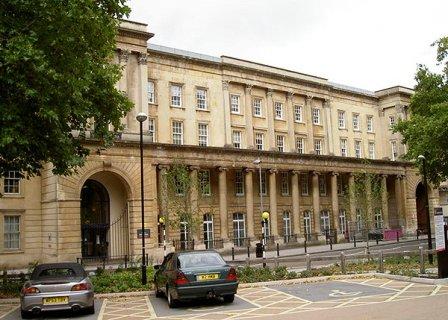 The Council have been tenants of Brunel House from the 1980s, when offices were built behind the preserved, Grade II listed, neo-classical façade. Unite Students has recently asked whether the Council will permit a change of use to student accommodation. The Council will vacate the offices in the late summer. Unite’s scheme would demolish and reconstruct the offices to provide 436 student bed-spaces. Unite says that the offices would be difficult to relet and that the new use would contribute to the vitality and economy of the area.

The society agrees with Unite that the site is highly sustainable for student accommodation. If the Council accepts that it can tolerate the loss of office floorspace, the Society supports the change of use. The scheme would a give a new use to a large obsolescent city centre office building and help relieve the pressure of student accommodation on the city’s residential areas.

There remain various matters for Unite to resolve with the Council. Would the scheme harmfully affect the existing residential population? Would a larger building harm the views within the conservation area and the settings of local listed buildings? The aspect of the scheme that the Society cannot support is new building beside and behind Brunel House in the ‘Horse Bazaar’, now the car park. The right-hand carriage entrance leads through to the amphitheatre, which is a long narrow space framed by ruined walls with an apsidal end relieved by the frames of tall arched windows.

Brunel House was originally designed by R.S. Pope and I.K. Brunel as the Royal Western Hotel. After the hotel closed the amphitheatre became the ‘Horse Bazaar’. The recent Grade II listing indicates that Historic England recognises the importance of this area to the fabric of the Park Street Conservation Area. Development within the Horse Bazaar would harm the significance of the listed structure, which would lose its spatial coherence. Unite could create a recreational area in the Horse Bazaar, which would mitigate the high density of this development and enhance its setting and the conservation area and provide an amenity for the future occupants.

The Society has seen Unite’s development plans during their public consultation. The St. George’s Road façade would remain unchanged. Unite propose to add another floor to the south, Brandon Steep elevation. The extra floor would not harm local views and if sympathetically designed, could improve the façade. Unite also wish the extend the blocks at the rear of the site, which would not be visible from the street. However, the Bigwood Lane residents (above the former quarry and below Great George Street) are concerned about the impact of the proposed development of these blocks upon their outlook. The Society sympathises with the residents. Unite will not build on the former Horse Bazaar, behind Brunel House. They will improve the grounds, which have become overgrown. A development of this size attracts a public art contribution. The Council occupies much of the land opposite Brunel House. Unite and the Council should consider the construction of a focal/gathering point there to attract the student pedestrians who will use the area.

To locate this site, use this link to the Google map..