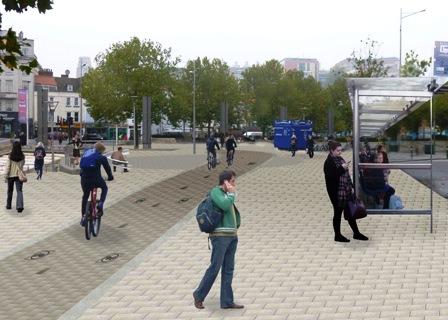 Bristol Civic Society supports the attempt to make the cycle route clearer. We appreciate the difficulties in making provision for the safe movement of cyclists and pedestrians within the public realm improvements. The Society recognises that the changes create more space to accommodate both cyclists and pedestrians, for example where the cycle route crosses the board walk and Anchor Road, and where there currently is a pinch point between the bus shelter and the circular seating steps.

The proposed cycle route on Broad Quay coming from Prince Street will be delineated by subtle surface material changes, so as not to harm the character of the public realm, and with granite edges, a centre line and cycle logos. It is not sunken. This should be enough to mark the route clearly for cyclists, but experience will be the test of this. Cyclists may go too fast on the straight section of the cycle route – might it be possible to slow cyclists down through subtle placement of planters close to the route?

However, the route becomes less clear as it crosses the boardwalk across to the side opposite the Hippodrome, and at that point there will continue to be a random mix of pedestrian movements, both east-west and south-north. Ideally, there would be designated pedestrian crossing-points of the cycle route at this point, but the mix of movement directions probably makes this impractical. In practice, where there is a dense mix of pedestrians, pedestrians go where they want to go, and cyclists generally slow down appropriately.

We recognise that the design has responded to consultation. We support the proposed “Share with Care” signage, which we assume will strike a balance between prominence and not harming the character of the space.