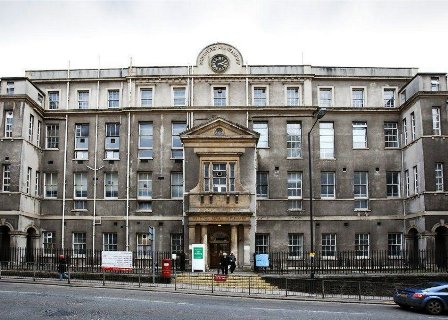 BRI Old Building October 2017 update
This is the chronology and current situation:

In 2016, University Hospitals Bristol (UHB) will vacate the old, Charity Universal Building, which will become redundant. UHB proposes to demolish the Charity Universal building and all the buildings on the site bounded by Maudlin, Lower Maudlin and Whitsun Streets. UHB proposes to build a small medical school. The remainder of the new building would be a student residential development of more than 800 beds. This massive building would rise from three floors at the Saint James House/White Hart end of the site to eight floors on Marlborough Street.

The buildings on the site are heritage assets that contribute to the setting of the St James’ Parade Conservation Area and the setting of the adjacent listed buildings. The buildings are listed Monuments within the Historic Environment Record and are nominated to the emerging Local List. As a major owner of large and important civic buildings, UHB has a responsibility to enhance and improve the public realm. The 18th century façade and forecourt form a substantial and distinguished element in the street scape. The Charity Universal façade displays 200 years’ development of the hospital; it is a source of civic pride. Only a narrow commercial attitude towards its public assets would propose the erection of an ‘anywhere’ utility student accommodation block to replace a heritage asset.

Demolition has not been the choice of other hospital trusts with a legacy of historic buildings in important streets. UHB’s proposal compares unhappily with its successful disposal and regeneration of the former Bristol General Hospital estate. UHB should retain the redundant buildings and adapt and convert them to alternative uses. The Charity Universal building would lend itself to conversion to residential use. The Society would support some supplemental development to the southern end of the site. This large and important city centre site merits uses that are more inventive than a mass of student accommodation. The site must include other forms of residential development to improve the diversity of accommodation to contribute to the public realm.

The Council said that it valued the historic building and that the mass of the replacement building would be too large for the site. Unite, a publicly quoted company who provide student accommodation, now carry the proposal forward. The changes made to the UHB’s earlier proposal are to reduce the student accommodation to 742 units and to include a small amount of office space.

The Society has repeated the response that it made to UHB’s planning enquiry. This massive building would rise from three floors at the Saint James House/White Hart end of the site to eight floors on Marlborough Street.

The Society is pleased that Unite Students, the owner of the soon to be redundant BRI Old Building, have produced a revised development, which will retain and redevelop the Old Building and Frith’s mortuary chapel. The scheme includes a medical school in the lower two floors with Unite’s offices above. The Council and the Society support the principle of the revised scheme. The removal of the pipe clutter and new render from the Marlborough Street elevation of the Old Building would be a major conservation gain and a significant contribution to imaginative development in Bristol. The Old Building was one of the first four British charity hospitals and a living demonstration of the development of hospital building over 200 years. The revised scheme would create a superb headquarters for Unite. Unite would demolish remove the wall between the Whitson Street to reveal the chapel to street level.

The Society supports the demolition of all of the other buildings to develop a purpose built, student accommodation block. The area to be demolished is surrounded on Whitson Street and Lower Maudlin Street with tall, 19th century, rubble walls. The Society would accept the demolition of the walls if the replacement building offers a more active street frontage. In Lower Maudlin Street the proposed new block would be taller than the Eye and Dental Hospitals. To the south-east the new block will overlook the Grade I listed St. James Priory. The limitations of space restrict the options that could mitigate the impact of the new block.

The Society is sensitive to the public gain produced by Unite’s decision to retain the Charity Universal Building. Unite insist that the scheme must deliver 750 student accommodation units to be financially viable. The Society has not seen the viability evidence. The Society has voiced its concern about the height and mass of the new student accommodation blocks. It is too early in the planning process for Unite’s architects to design the new student blocks.