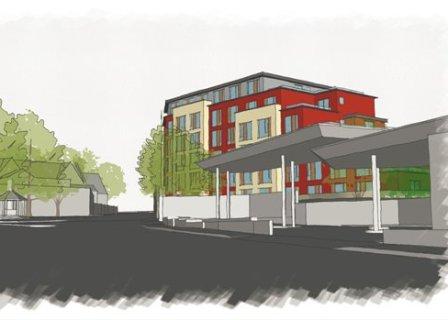 The image shows the top of Blackboy Hill. Westbury Road lies directly ahead, the reconstructed ASDA filling station is on the right. The proposal would demolish a 1930s terrace of houses and several informal buildings. The Society supports the Council who approve the principle of the development and the change of use.

The Society suggested improvements to the scheme. The Society said that the new building would be too tall. The insurance building at the top of Blackboy Hill should not be the point of reference. That block is out of scale to the architectural context; it dominates the landscape. The Society suggested that if the new building were lower, a larger plan could provide the same floor area. A lower building would have a more satisfactory relationship with the mass and height of the neighbouring buildings. The Society supported the retention of the mature trees and improvements to the footpath from Westbury Road to St. Vincent’s Hill.

The Society welcomed the robust red brick construction above a natural stone plinth for the principal structure, the light weight appearance of the upper floor, the stepped façade and the varied roof profile. The Society suggested that the rendered frames appear out of proportion and could benefit from further refinement. The Society regretted the introduction of another building with a flat roof in the conservation area. The Society might support a building of this height if the roof added interest to the skyline. This development could incorporate photovoltaic (PV) generation elements in an imaginative manner, the solar PV built into the mansard roof General Hospital is an example.

The Society considered the effects of the proposal on the public realm. It did not comment on the proposal’s impact on neighbouring properties.

To locate this site, use this link to the Google map.