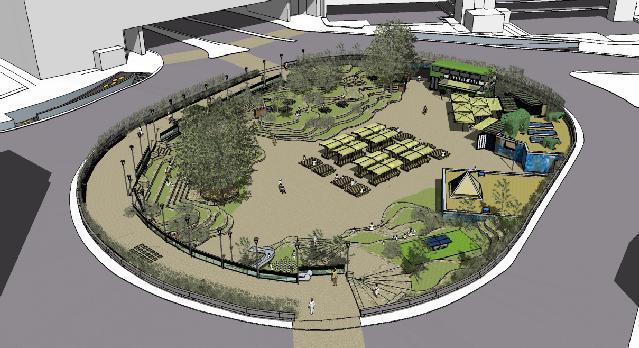 The Bearpit Improvement Group (BIG) has been fighting for change in Bristol’s Bearpit (a sunken area at St James Barton Roundabout), since 2010. It’s achieved some great successes along the way; starting with small, short-term improvements such as bringing in local traders, artwork and greening the space.

Research had shown that the Bearpit scored consistently highly as an unsafe place regardless of age, gender or housing area. Fear of crime tends to be higher in areas that are unpopulated, dimly lit, and unattractive and lacking in natural surveillance. Originally, these were the characteristics of the Bearpit but over the course of the last few years the BIG has gradually been addressing these issues.

A safe and secure over-ground pedestrian and cycle way is planned, complementing the improvements made by the group so far. Bristol Civic Society wholeheartedly endorses these plans.

The plan, subject to final design and budget decisions, is for the walkway to skirt the boundary of the Bearpit between Stokes Croft and Haymarket at street level, separated from the road by the existing concrete barrier. There will be steps down into the Bearpit from the walkway at either end, as well as terraces providing ‘ampitheatre’ style seating.

The proposed pedestrian and cycle walkway would allow for safer transit across the city, improved bus stop accessability, better routes for those with disabilities, and better night-time security for pedestrians. The walkway would also overlook the rest of the area, providing good surveillance, helping to make it fell safer.”

Presenting to George Ferguson on 13th May 2013 Alan Morris, Chair of the Bearpit Improvement Group and member of the Bristol Civic Society, commented on the benefits of the proposed walkway:

“It’s important to look at the bigger picture – we’re keen to create a safe, welcome space for all. Trading is just one part of the strategy. The walkway is fundamental to making it a safe space; reducing blind corners and increasing passive surveillance. Traders are there only part of the time, it’s important to consider safety at other times of the day and night.”

Many people take diversions to avoid the Bearpit currently but those who avoid the space now may start to use the walkway. If the space is seen to be attractive, they will be encouraged to go down into the space and use it. Let’s avoid it being a bypass and broaden the mix of people who use the space.

The roundabout has been cited as one of the most dangerous for cyclists in the UK. The Gloucester Road route into town is used more heavily than the railway path cycle route. The design strategy is to cater for the less confident cyclist.