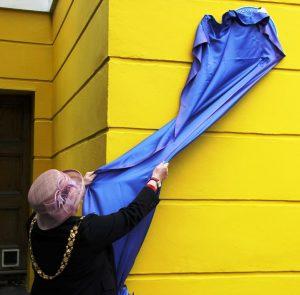 On Friday, 11 October 2019 the Right Honourable Lord Mayor, Councillor Jos Clark unveiled a plaque at 39 Hampton Park, Redland. The house was the family home of a Hungarian, Balázs Győrffy who fled the country following the Russian invasion in 1956. He was a swimmer of Olympic standard and won a sports scholarship to Yale University, where he gained a science degree and then a PhD on the theory of pressure effects on the output of gas lasers. From 1970 until his death in 2012 he held the posts of lecturer, then reader, professor and finally emeritus professor at the University of Bristol.

The Panel had long discussions with the applicants ‒ neighbours and university colleagues of Balázs. We each strove to capture the composite whole of a remarkable man. He was a theoretical physicist described as one of the dominant international figures in developing condensed matter theory. He was an inspirational mentor to his students, politically active locally and a champion butterfly-stroke swimmer.

After the unveiling, Hungarian food and wine was served at Mr Louis Lewis-Smith’s nearby Crying Wolf cocktail bar, which he offered gratis. Thanks are also due to Dr Jill White for organisation and Carole Győrffy, Gita Győrffy, Xanthe Clay and Monica Berry for preparing the food. The gathering enjoyed Eastern European music played by local band Troyka (image left).