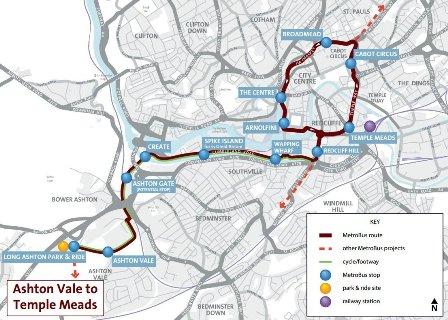 This is the current position (May 2014) of the AVTM, which has been a heavily contentious issue. A short description of the scheme: This will replace the current 903 bus service. The Metrobus will run from the Long Ashton Park and Ride through Ashton Park, across the restored railway bridge over the Avon, along Cumberland Road and Commercial Road, up Redcliffe Hill onto Redcliffe Way to Temple Meads, Temple Way, Cabot Circus, the Centre, Redcliffe Hill and back to the Park and Ride. It will be a one way circuit.

What is new is that the section from the Park and Ride to the Cumberland Road will be a guided bus way. Buses that use the route, which will include the ‘X’ services from North Somerset, are fitted with a guide wheel that ‘feels’ the kerb and steers the bus. The bus way is a concrete channel reserved for buses. It will pass under the elevated road system to avoid other traffic on the Brunel Way. At the Cumberland Road, the buses revert to driver steered vehicles. At the 2012, Transport and Works Act public enquiry the Society opposed the bus route that would have taken buses along the former Docks Extension Railway through the Harbourside and across Prince Street Bridge.

The Society also questioned the financial viability of the scheme. The Council will borrow £14m and be responsible for any cost overrun. Fortunately, one of the Mayor’s first acts was to revise the route away from the Harbour and the Prince Street Bridge to Redcliffe Hill. In April 2014, the Council received planning permission for works along the route between the former Avon Railway Bridge and Redcliffe Hill. The works will include building a new flood wall along Cumberland Road, replacing the damaged railings, building bus shelters and a second bridge beside the Bathurst Basin lock bridge. The Council has not yet discharged the planning conditions imposed to protect the landscape to the west of the Avon Railway Bridge. The Society’s current concern relates to earthworks in Ashton Park to mitigate the impact of the route on the park and the design of the flyover over the railway at Winterstoke Road. The return of the former Redcliffe Way flyover would be unwelcome. The Society awaits with interest the news about the tenders that the Council receives from contractors when it advertises the construction contract.