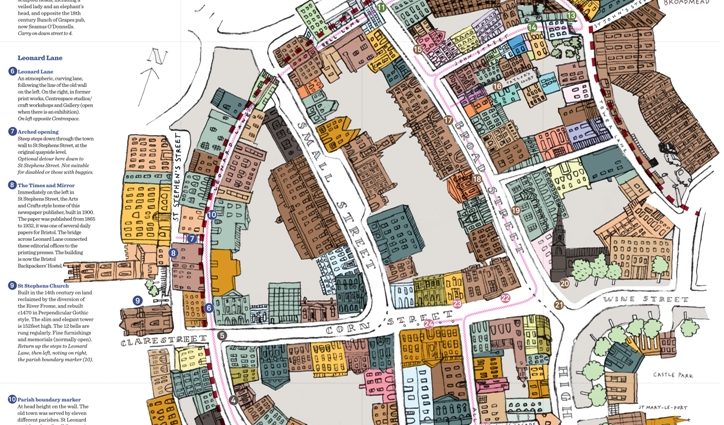 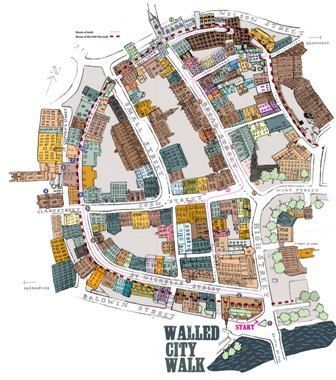 A beautifully artist-designed map and walking guide of the Old City together with postcards featuring individual businesses was launched in April 2014. It puts Bristol’s Old City on to the map – bringing its fascinating history to life and putting it into context with today’s bustling independent business community. It was developed by a partnership project in which Bristol Civic Society played a key part.

The “Walled City” walking guide follows the town walls of Norman Bristol. With the walls no longer visible, their route is little understood or used, and the rich architectural heritage of the Old City often goes unnoticed. The guide explains the history of the area and its buildings and outlines those aspects of the social, religious and, above all, the mercantile life of the city that have greatly influenced the last 900 years of its development – and still set the context of today’s bustling independent business community.

The walking guide is accompanied by a set of postcards that further highlight certain buildings and businesses, to ensure that the increased footfall to the area will benefit the sustainability of its unique business community.

The execution of the project was carried out by a partnership of local stakeholders, each with their individual areas of expertise, using local knowledge and traditional processes. Centrespace was leading on the creative execution, Bristol Civic Society on the historic background and St Stephen’s on the spiritual context. The project was funded by Bristol City Council’s Active Neighbourhood Transport Grant, supported by the University of the West of England (UWE), and coordinated by Destination Bristol.

The walking guide and postcards are available at the Tourist Information Centre, the local shops in the Old City, and online under www.bristololdcity.co.uk/old-city-heritage-trail.