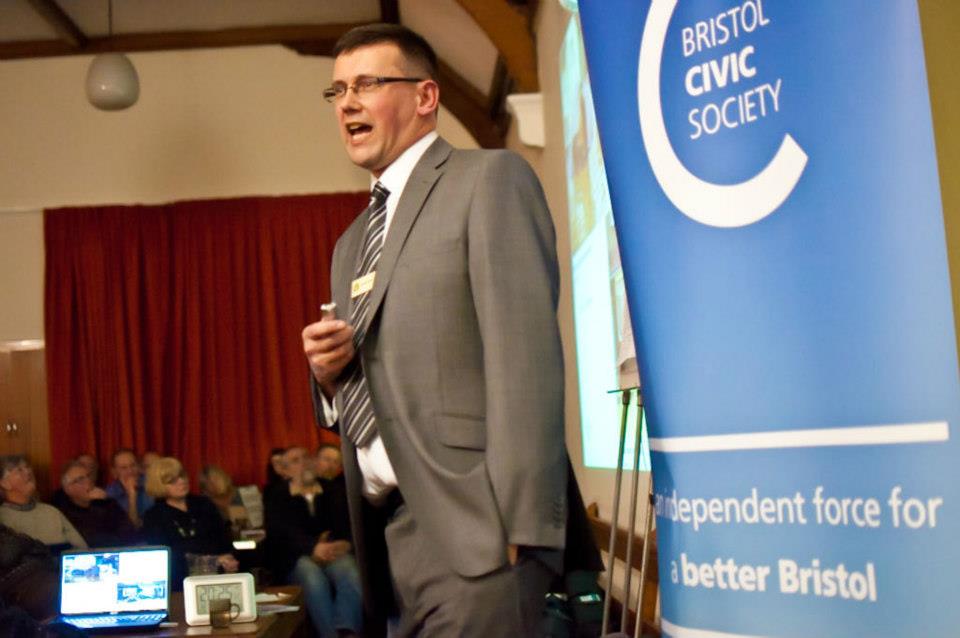 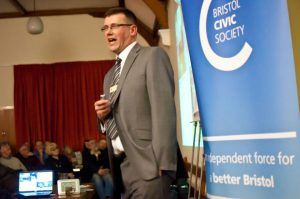 Melvin Wood, a civil engineer from the Environment Agency gave a most informative talk about Bristol’s rivers and associated flood risks. Due to the recent flooding in and around the city centre the content was of particular interest to members and resulted in one of the most well attended talks the society has hosted to date.

From a historical aspect, few people know about the watercourses in Bristol and how they came about. As such, we thought we would share a little of what we gleaned with you.

The original course of the River Frome followed St Stephen’s Street and Baldwin Street, joining the River Avon near Bristol Bridge. The two rivers flowed close together before they intertwined, forming a narrow piece of land that was easy to defend and control. This is where the Saxon settlement of Brigstow was born.

William the Conqueror saw the strategic significance of Bristol and sent Geoffrey of Mowbray to take charge of the town. He built a simple fort, which was later transformed by Robin of Gloucester into what was reputedly a huge castle twice the size of Caernarfon.

A moat was formed around the castle walls with weirs that used water from the Frome. Bristol was essentially completely encircled by the two rivers.

Sadly, by the 16th Century the castle fell into disrepair and disrepute with the rise of the merchant classes. The castle precinct became a refuge for outlaws and in 1654 Cromwell ordered the castle to be dismantled.

Bristol’s main shopping centre was built over the castle grounds and remained until it was destroyed by incendiary bombs in 1940. However, the moat remains underground. It’s been covered since 1847, emptying into the floating harbor near the Ambulance Station. It runs underground around the South, East and North sides of Castle Park.

In 1793, the city approved the new cut scheme. This involved the construction of Cumberland Basin, Bathurst Basin, Feeder Canal and Netham Dam to form the Floating Harbour. In 1813, scouring sluices were introduced at Underfall Yard to help combat serious siltation issues as recommended by Isambard Kingdom Brunel.

1825 brought a heat wave that brought to light the problem of the city’s sewerage flowing to the tidelocked Floating Harbour. 1826 saw the construction of Mylne’s Culvert that would take all the polluted flow of the River Frome from Stone Bridge under the harbor and dispense of it into the River Avon near Bathurst Avon Lock. Stone Gates, a set of dock gates, were also installed to control the floodwaters. Water quality was improved dramatically but further alterations have been required since to reduce impact of flooding from what was essentially an open sewer system. Think of Venice in the summertime…

Flooding has historically occurred following high tides on the River Avon or high flows on the River Frome, or a combination of both. The earliest recorded flood was on 20th January 1607 whereby several feet of water flooded Redcliffe, St Thomas and Temple Street.

In 1997, the Environment Agency found that the Fosse and Stone Gates, which play a major part in minimising flood risk in Bristol, were in disrepair. In March 1998 the Environment Agency started work to replace these gates with low-level weirs and a smaller sluice gate. This work was completed in September of the same year.

Although most of central Bristol is protected from flooding, which would occur on average once in 150 years, at some point in the future a flood will exceed the current design. The Environment Agency is drawing up a major incident plan with Bristol City Council to minimise the risk to life in this eventuality, details of which can be found at the Environment Agency’s office in Bridgwater.

(Content taken from the Environment Agency’s film, Lost Rivers of Bristol; further information may be found on the Bristol Floating Harbour website http://www.bristolfloatingharbour.org.uk/).

A culvert walk is being arranged for Bristol Civic Society members and non-members. Date and time will be posted via facebook and twitter in the near future.

A Zoom presentation by Geoff Wallis on the industrial and maritime heritage in and around the Cumberland Basin.